I participated in several different workshops at the Nordic Light Workshop Marathon. One of the most difficult ones for me was when we were doing Rock’N’Roll photography, or concert photography.

The teachers were Anne Lise Flavik and Morten Reiten They wanted us to feel like real photo-journalists so we got the following task. We got 30 minutes to find several locations and take pictures of two bands and two different singers. That was really hard – I have not directed groups of people like that before, but luckily one of the photographers (Tonje Sætre Indrearne) in my group of participants had some good ideas. By taking some photos when she was directing I got a couple of nice photos as well.

After that we went inside and got to photograph a band for three songs. I had a great time and I think I got some great pictures there as well.

I would like to say thank you to the artists that participated in this little stunt and let us use them as models.

I also have lost the names of two of the models. One is the owner of “Fasting Kjeller’n” in Kristiansund, and one is the singer in another band that I did not get to photograph while they were playing.

I also was really impressed with both bands I got to photograph. They were talented and played great music. Check them out on Spotify, Wimp or wherever you might find them. I have added the links to their Facebook pages and band sites. 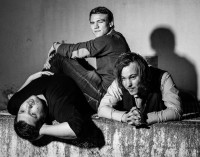 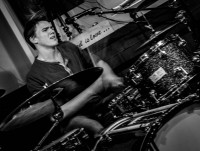 Having a smoke in the dark