Skip to content
Home » Photography » China and the 2009 Solar Eclipse 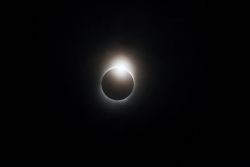 At the end of the Solar Eclipse we got the diamond ring effect.

22 July 2009 the biggest Solar Eclipse this century occurred over Asia. Escape Travel in cooperation with Knut Jørgen Røed Ødegaard arranged several alternatives for visiting both China and viewing the Solar Eclipse. My girlfriend and I have always wanted to visit China, and this seemed to be an interesting opportunity. We went for the longest alternative, a 2 week roundtrip of China culminating with the Solar Eclipse and a visit to Shanghai. China is a beautiful country and very different compared to Norway. A 2 week long roundtrip do not give the country justice, but that was what we had available this time around. It would have been better to visit in April, May, September or October though. We experienced mostly temperatures above 35°C and a humidity around 98% or more, but since we wanted to see a Solar Eclipse as well, that was not an option.

Escape had hired two experienced Norwegian China travellers and guides to help us in our quest to experience China safely. In addition to this, several Chinese guides that spoke English pretty well guided us through the several cities and sites we visited. China turned out to be something different and exciting pretty fast. In a strange mix of familiar logos and products new sights, smells, foods, and plants displayed themselves everywhere. The biggest turn-downs were the pollution and the way some Chinese laughed loudly and pointed at us when they saw us. I guess we look different and “ugly” in their eyes, but most people do not like to be ridiculed like that everywhere they go. Most people we met were kind, helpful and pleasant though, and I would say that China is probably one of the safest nations in the world to travel.

The roundtrip of China started in Beijing where we visited Tiananmen square, the forbidden city, the Great Wall of China and a few other sights. It was a bit strange to realise that almost every way we were used to communicate with people in Europe were unavailable. Very few people spoke English, we could not write out our destination or our questions with letters and maps was not something the average Chinese had ever used or even seen. The only thing we had left was body language! 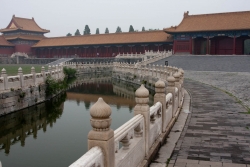 The forbidden city was nice, but the smog made it a bit grey. 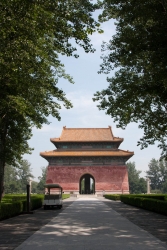 The Ming tombs was interesting, this is the entrance to the sacred way. 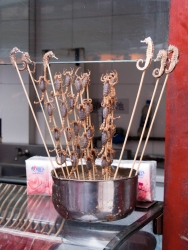 In Beijing they had snacks that I haven’t tried before

One of the biggest memories from Beijing was actually the pollution. The smog was thick on most days and hung low everywhere we went. The day we visited the Great Wall was a very lucky exception. A pleasant wind blew the smog away and we were treated with a stunning vista of the wall, the mountains to the North and West of Beijing and the smoking city behind us. 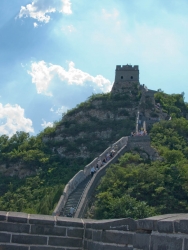 The Great Wall of China was impressive.

After Beijing we flew west towards Xi’an where the famous terracotta warriors had been found next to the grave of the first Chinese emperor. The story about their discovery by two farmers digging a new well is well known, and I feel it may have turned into somewhat of a modern myth in China. One of the farmers is still alive. He was currently employed as kind of a living part of the exhibition, the way he was put to signing books for the tourist and displayed in the museum shop. The terracotta figures themselves were amazing though. Hundreds of them were lined up in neat rows like soldiers in a parade. I just hope that they manage to excavate the tomb itself in my lifetime. I can’t wait to see what that contains. 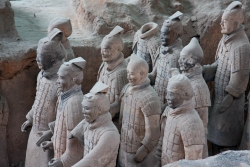 Some of the terracotta warriors.

After a short stay in Xi’an we travelled south to Guilin. An area famous for its landscape and beautiful nature. The area is an old part of the ocean and the famous geology of the area is a frequent part of Chinese art. This type of geology is called karst limestone formations. This area was one of the most beautiful areas I have ever seen. It had a lot of bird-life, and the green scenery together with all the big butterflies, dragonflies and other strange sights made this one of the most beautiful experiences in China. 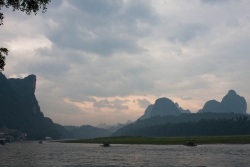 The view of the mountains in Guilin by evening light. 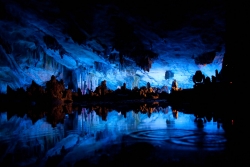 The Reed Flute Cave was a large limestone cave in Guilin that was artificially illuminated. 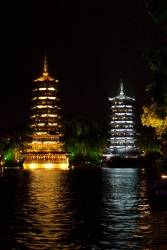 The gold and silver pagodas in Guilin.

I had not tried to eat snake before.

The next stop was Hangzhou and the Solar Eclipse. For many of the participants this was the highlight of the trip. For me it was an important part, but I had never seen a total solar eclipse before and felt that the visit to China would have been exciting even without this event. But now, in hindsight, it was a bit more thrilling than anticipated. On the evening before the eclipse the weather was not promising. July is the Monsoon month in China, but we were now in the last few days of the rainy season, and might have nicer weather, but the clouds and the rain were returning from the sea, and large cloud formations were shaping up to the north of us. On the morning of the eclipse we left the hotel at 0345 in 3 buses and Knut Jørgen checked out the satellite photos of the clouds several times on our way to Tianhuangping(alternative in english) where we and a lot of other tourists had been directed to stay during the solar eclipse. We were in luck. It was partly cloudy, but just as the eclipse took place most of the clouds opened up and we had a really good show. You might say that the difference between a partial solar eclipse and a total solar eclipse is like the difference of eating a tasteless meal on a plane to sitting down in a top class restaurant and eating a splendid meal with good friends. Experiences that I hope that all of you may enjoy.

After the solar eclipse we enjoyed the sights of Hangzhou before we left by bus for Shanghai and the return to Norway. Shanghai with its tall skyscrapers turned out to be a nice ending to an amazing journey.

I would like to thank Escape Travel, Knut Jørgen Røed Ødegaard and all the people we met for making it a successful and enjoyable holiday in China.